You may think that open-air cinemas are a relatively new invention but the opposite is actually the case.

So let’s take a look into the history of the Drive In and Outdoor Cinema. In 1895 the Lumière brothers invented cinematography – the moving image. At the start of the 20th century these ‘living photographs’ amazed people in larger halls and traditional theaters. In 1907 the first mobile cinema came to life as a fun fair attraction.

A Travelling cinema in circa 1907 The world’s oldest open-air cinema in operation can be found in Broome, Australia.

The history of Sun Pictures in Broome, which opened as a picture theatre in 1916, includes tidal flooding during films, seating based on race, a boycott in response to this segregation and interruption by aircraft at the nearby airport. Something which seems totally absurd nowadays.

An Outdoor Cinema in Berlin in the 1920’s In 1933 the world’s first drive-in movie theater opened in Camden, New Jersey.

The concept was developed by Richard Hollingshead Jr. who experimented with various projection and sound techniques in the driveway of his house. Using a 1928 Kodak projector mounted on the hood of his car and aimed at a screen pinned to some trees, Hollingshead worked out the spacing logistics to make sure that all cars had an unobstructed view of the screen. He received a patent for his idea in May 1933 and opened his first drive-in theater only three weeks later.

They quickly fanned out across the USA.

The drive-in offered cheap family entertainment, a place where parents could take the kids without having to shell out for a baby sitter, or worry about the little ones bothering other patrons – this still holds good today! In fact, that was Hollingshead’s original hook: “The whole family is welcome, regardless of how noisy the children are.” The drive-in’s peak popularity lasted from the late 1950s until the mid-’60s, when nearly 5,000 theaters were operating in the United States. It wasn’t only the Americans enjoying the drive-in cinema because the Europeans also wanted a slice of the action. The first drive-in in Europe is located in Frankfurt and still operates today. In the 1990s the inflatable screen came into action. The first prototype of the brand-named AIRSCREEN was invented in August 1994 by the German engineer Günter Ganzevoort. From now on, any location could be turned into an open-air cinema quickly and inexpensively. Quickly, the inflatable screen idea spread around the world and certainly revolutionized the outdoor movie market. This is where we come into the mix. With our Airscreens we can operate pretty much anywhere. They have come a long way since 1994 and are better than ever.

If you have the location we can provide the equipment for you to put on the perfect Drive In Cinema event. Get in contact with us today for your FREE no obligation quote. 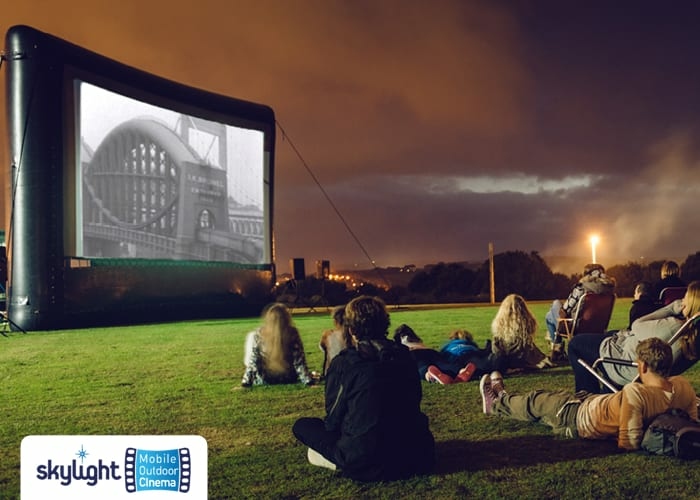